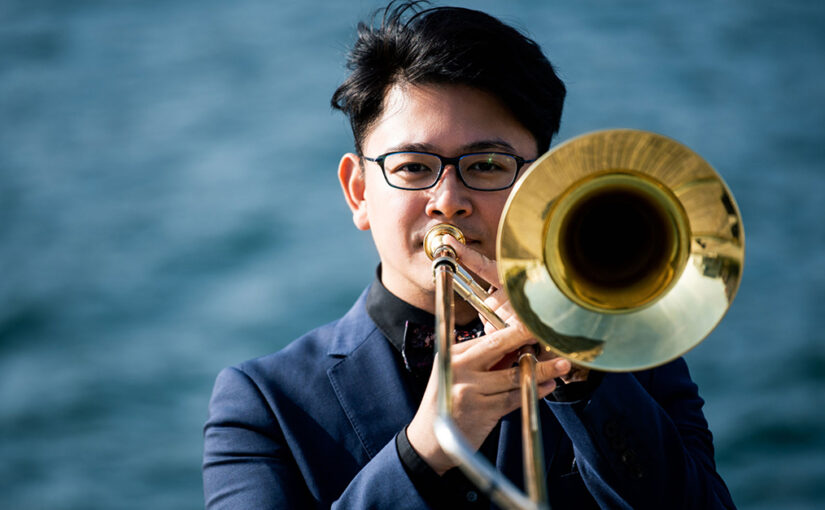 A Japanese solo trombonist active worldwide, Yu Tamaki Hoso is a chamber and orchestra musician, educator, entrepreneur, published author, and producer. Yu currently resides in Denmark and serves as an official artist for Pro Arte Musicae of Tokyo, S.E. Shires Company of Boston, and Willie’s Custom Brass of Yamanashi, as well as Music Director of FukuTama Festival in Shimane.

Since 2018, Yu has been focusing on solo performance after a 15-year career as an orchestral trombonist in Japan, the USA and Europe. Currently focusing on giving recitals, concerto appearances and master classes, he has made appearances in Japan, the USA, Denmark, Czech Republic, France, Germany, Italy, Norway, South Korea, Sweden, Switzerland, Taiwan, Turkey, and the UK. His first album “Love and Chaos” was released in 2018. His second album “Colors for Trombone” and first single “Game from An;G;El” were released in 2019 and are both available on iTunes/Apple Music and other major streaming services.

Check out his performance at the American Trombone Workshop, as a soloist with the US Army Band, performing the T-Bone Concerto:

In addition to his contributions as a performer, Yu has has been conducting educational workshops and master classes for young professionals since 2014. Workshops have been sponsored by the Tokyo metropolitan government, Pro Arte Musicae, and the Shinjuku ward office of Tokyo, where he continues to instruct students and help guide them in their musical careers. Having had the opportunity to both study and perform trombone all over the world in Asia, Europe, and North America, Yu is able to offer a unique perspective and broad understanding of trombone performance to the next generation of musicians.

Beyond working with students and professional collaborations, Yu has shared his experiences through writing various monthly articles – Challenging to the World and One Point Lessons in Band Journal (Ongaku No Tomo Sha Co.). He has also been featured in the Kobe Shimbun and the San-in Chuo Shimpo newspapers as well as Pipers magazine (Sugihara Shoten Co.).

While his worldwide performances, workshops, and publications have done much to add to the exposure and prestige of solo trombone, perhaps Yu’s greatest contribution to the field has been through his commissioning of new works by renowned composers such as Samuel Adler, Yasuhide Ito, Miho Hazama, Geoffrey Gordon, and Minako Seki, aiming for the progressive expansion of the musical language of solo trombone.

Yu’s passion and gift for sharing the human experience through music is evident not only in his expressive performance but also through his numerous collaborations and educational endeavors. Yu Tamaki Hoso is leaving his mark on the world one note at a time.